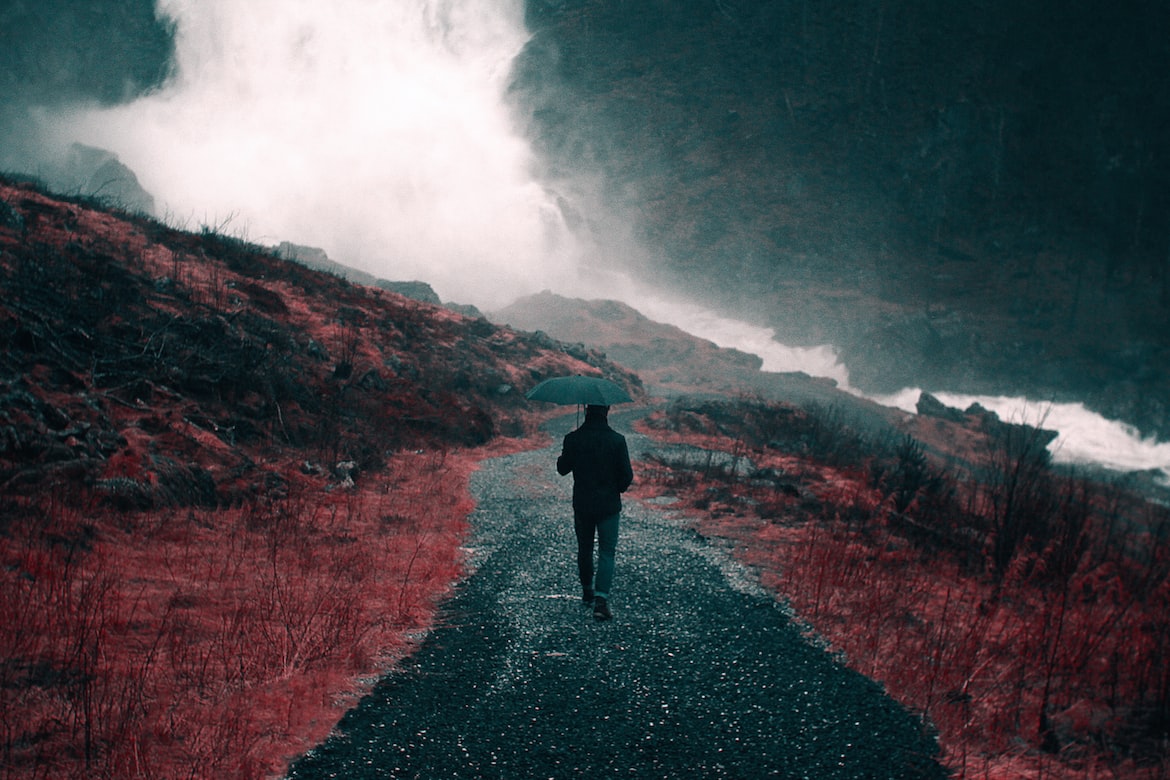 I was on a weekend away and as usual, I wasn’t enjoying myself even whilst being at a nice Spa since I was unable to travel due to Covid restrictions.

I’ve been suffering somewhat with my health this past year, due to Long Covid and I was still getting used to using my lungs other than for moaning in bed (not even in the fun way).

Fortunately, over the last few months, I had managed to slowly increase fitness each day which meant my lungs were getting stronger with my fatigue and brain fog slowly disappearing.

It had been a challenging year for me as it has been for thousands of others and I felt it finally was starting to feel the weight of it all on me. We often feel more exhausted mentally than we do physically because of the constant challenges we face.

As I was sitting in this beautiful garden trying to be present to the moment, I remembered the times I wasn’t feeling so great and what made me instantly feel like I had a lot more control. As strange as it sounds that one thing was as simple as accepting how I was feeling at that moment.

That’s it. Acceptance of all I was feeling without any guilt or judgement of it.

This is usually extremely difficult to do as we live in a society where we’re told to cheer up if we’re feeling even a little sad or upset, so we don’t get the chance to explore our feelings.

This then begs the question; how do we fix how we’re feeling if we constantly avoid it?

Acceptance of how we feel is not an easy task as it takes a lot of courage. This is mostly because the first thing that it requires us to do is to surrender control, which if you’re like me, it’s not easy to do.

What does Acceptance do for us?

Over time experiencing lower negative emotions promoted psychological health, and the effectiveness of this improved even more when it was done on a habitual basis.

What the study also found was that when acceptance was a habitual practise with participants it greatly reduced the impact of those negative emotions during the long term. Over time, people tend to experience lower negative emotions which in turn would then promote better psychological health.

By trying to suppress negative mental experiences (like feeling guilty for being angry or sad over something small) often backfires and further enhances the negative feelings.

However, when people accept their mental experiences, these experiences run their natural relatively short-lived course rather than them be exacerbated.

Other studies have also found that trying to suppress negative emotions or thoughts often result in rebound effects in which the frequency and intensity of thoughts increase over time.

We tend to make ourselves feel guilty and even as parents, friends or family, tend to make others feel guilty for feeling angry or upset over something no matter how small. How many times can you remember telling a friend to get over it or stop being a baby?

So how do we take back control of our lives using Acceptance?

#1 Acceptance without any guilt or judgement

The paradox of life is this… We take back control of our emotions by acknowledging our emotions and not trying to control them.

If we’re feeling sad, upset or angry the first and most productive thing we can do is acknowledge our feelings without judgement or guilt.

Maybe you’ve had a pretty crappy day, or someone on your way home managed to piss you off and now you’re wondering why they’re allowed to drive when they’re clearly blind.

Whatever the reason for how you’re feeling the first step would be to always accept it and maybe even say it out loud:

I feel like shit because they give driving licenses to anyone these days!

Immediately this acknowledgement will lift a huge weight off your shoulders because half the battle usually is facing how we feel without feeling guilty for feeling in a specific type of way.

#2 Then maybe you can use some NLP magic to help

Using a great NLP technique here we can remove what is upsetting or at the very least, reduce the impact it has on us. This is what I did for a quick mental reset when someone stared at me for too long in a coffee shop (its a joke, I’m not really that sensitive):

A – Firstly, I get myself in a relaxed state. This is much easier to do when you’re lying down so while I stretch over the sofa I take 3 deep breaths to begin with

B – I picture myself in a room and in that room there is a television. On this TV, I play the scenario or situation that is causing me grief. In this particular instance, a guy in the coffee line kept turning back to look at my hair before asking me if it was fake (WTF right)

C – I start firstly by walking backwards from the TV, so the image/video on the TV begins to get smaller and smaller as I continue to step further and further back

E – I then assess whether I feel better or not just by putting some distance and removing the colour; usually, this is enough for me. If not then I go to the last point but only when I absolutely need it and there is no other choice

F – I imagine holding a shotgun which I aim at the TV before firing it. As the bullets hit their target, the TV smashes into small tiny pieces across the floor.

#3 Find the lesson, usually, it’s not what you think

The happiest people I have met in my life have been the people who saw life as their university and themselves as a student right up to the moment they left this world.

They continuously were on the path of learning and gaining new pieces of knowledge or wisdom, whether it was from a wise old saint or a 10-year-old child. They believed strongly that life was always granting them pearls of wisdom and teaching them the secrets of the universe.

Because of this, they always found lessons even in the harshest of circumstances because they felt that each moment was a chance to learn, develop or grow.

Life often teaches us many things and what I’ve learned from my own experience is that we often go through the same thing over and over again until we learn the lesson we are meant to have learnt the first time.

So here we should ask ourselves, what is it that this particular experience (although it may have upset me) is trying to teach me? What could I learn from this? How will this help me grow and become a better person?

Do I need to be more tolerant of the people I love? Do I need to work on my patience? Is there something that I’m doing that is making people behave in a certain way towards me?

Tough questions will always give us the most insightful answers, but are you tough enough to ask them?

#4 Ask yourself what’s in your control

Many times, we are more in control than we think. Usually, we’re afraid of facing reality as that itself would be an acknowledgement of the problem… And truth is, in most cases, we don’t want to accept the problems we have in our lives.

Let’s say we were to accept that we were miserable because of our job, or our partner, then what? Then we would feel guilty for not taking action to resolve it and 101 excuses will appear out of nowhere as to why we can’t change our partners or our jobs or anything else.

That’s why the first step always starts by accepting the feelings we are feeling without judgment and then seeing what’s in our control.

Whether it’s looking for another job, asking a friend for some help or seeing in what ways we can improve ourselves to be better; know always that we have the power to change whatever we may be going through and all we need is a little bit of courage.

The courage to first make habitual acceptance part of our lives, then the courage to focus on what’s in our control so we can take steps towards rectifying the situation.

#5 Lastly, change your attitude to that of gratitude

Time and time again I’ve mentioned that one of the best ways to long-lasting happiness is gratitude. Just by spending a few minutes each day focusing on all the good around you, all the people who have made a difference in your life and everything you are thankful for can release a combination of dopamine, oxytocin and endorphins.

If you don’t believe me, give it a go yourself. A few minutes to really focus on all the good that is surrounding you from your health, family, friends, the food on your plate to the roof over your head; no matter what you focus on just by being grateful for a few minutes will change how you feel dramatically.

Gratitude itself is a form of acceptance; what can you accept and be grateful for today?